Rune Converter - Whether you speak English, French, Spanish, Czech, or any other language which uses the Latin alphabet, you can use Rune Converter.

You can use the Latin to Runic translator to find out how your name or any other word you are interested in is written in the runic alphabet - Futhark.

Several offshoots have evolved because the runic character set has been used in various languages and countries for centuries. The runic alphabet is not uniform and varies depending on the country and time of use. The most famous ones are the Germanic Futhark, the Anglo-Saxon Futhork, and the Viking Futhork.

This runic translator uses the Germanic Futhark (The oldest form of the runic alphabet).

The oldest form of the runic alphabets is the Germanic Futhark, also known as the Elder Futhark, Older Futhark, or Old Futhark. Dating from the 1st century to the 8th century AD. The whole rune system forms an alphabet of 24 characters. 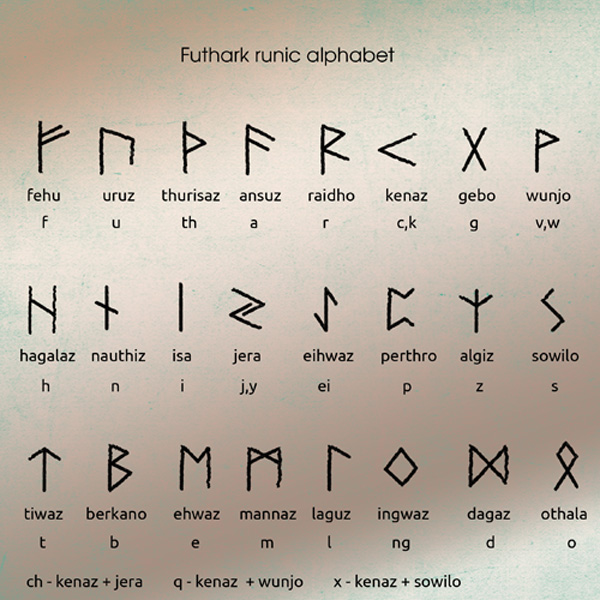 The runes are given a divine origin

It is said that the ancient Norse god Odin sacrificed himself to obtain runes. According to Norse mythology, Odin is the father of magic and shamanic spells, the master of inspiration. He can change his form, control the mind of enemies, prophesize and cast spells. His day is Wednesday, called in Old English Wódnesdæg (Odin's day), which is the basis of today's English Wednesday.

Odin hanged himself on the tree of life (Yggdrasil), for nine days and nine nights as a self-sacrificial ritual to gain knowledge of other worlds and be able to understand the runes. During his sacrificial actions, he made incredible discovery, he had visions and received secret runic wisdom.

The runes were not only used to write texts; they were also widely used for magical purposes, such as divination, witchcraft, protective talismans, and even healing.

Actually the runes were first used as a system of divination and later made into a writing system.

In Norse mythology, there are 24 pathways between the nine worlds which are placed along the tree of life. These pathways indicate the 24 runes that can also be used to unlock some of the mysteries of nine worlds and it's believed that the number 24 helps to shape and hold the world together. In the system, each rune has a symbolic meaning which represents a fundamental aspect of reality.

Below you will find the main meaning of each rune.